Sunny Summer Days on the Algarve 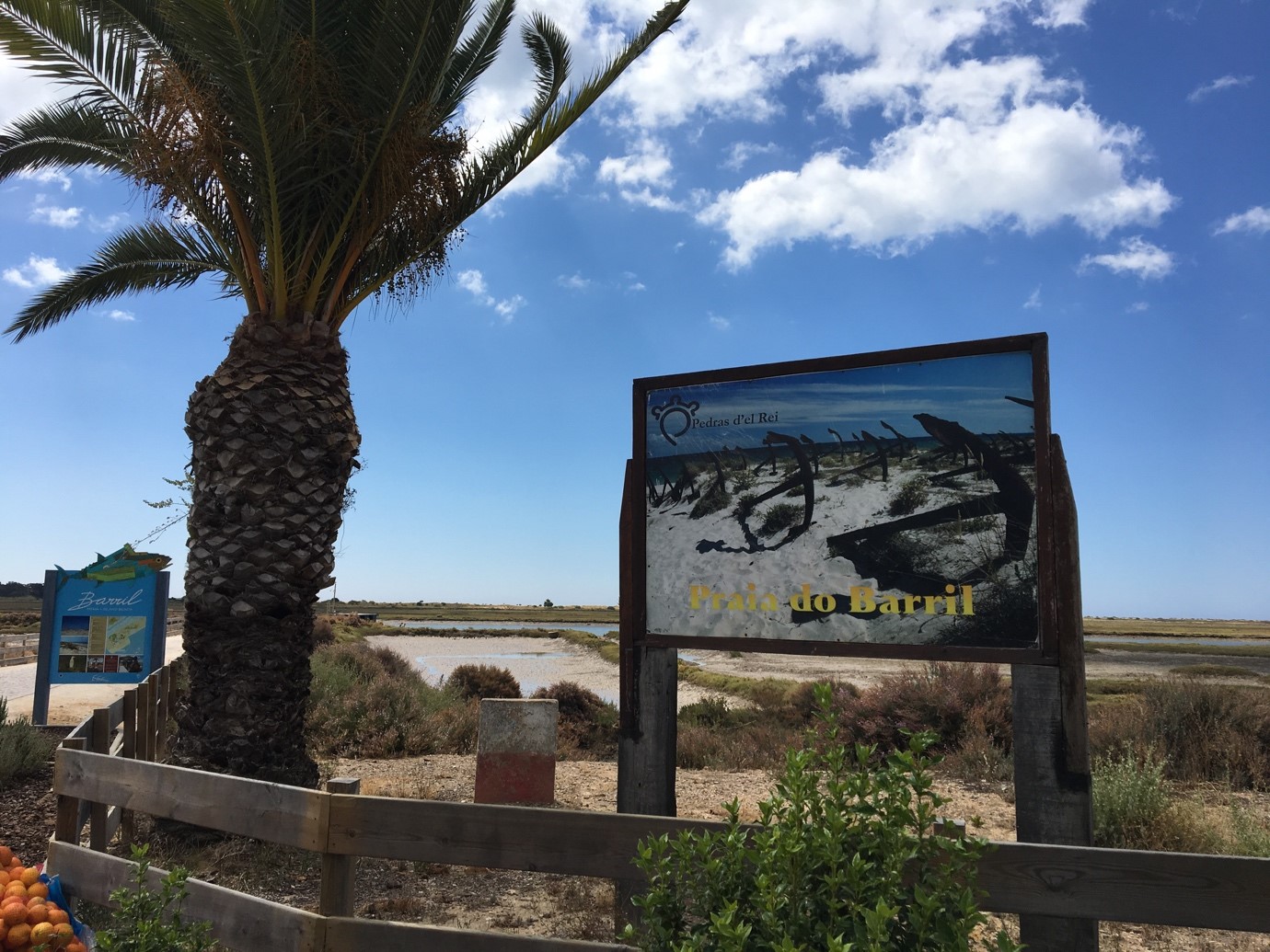 Despite having lived in the Algarve for a few years now, this was my first experience of Barril beach. What an amazing place! Just outside Tavira and a great day out for all the family, Barril beach is one of the best beaches on the eastern Algarve combining golden sands and clear waters. After parking the car and taking a short walk over the bridge to the little train station, we took the train which runs every five minutes back and forth to the beach. For a mere €1.30 you can travel the 1.5km from the mainland to the old tuna fishing village and spend the day on the beach, take a picnic or enjoy lunch at numerous snack bars or the museum restaurant.

The beach was once the location of a small tuna fishing community and remnants of its past still line the shore, a rustling memorial to the former fishing fleet with anchors embedded into the sand dunes. Just before the beach in front of the restaurant you’ll find several little shops which have taken up residence in the old tuna fishing huts.

If you prefer you can walk to the beach along the pathway beside the train track and at a leisurely stroll it will take about 15 minutes. For more information visit www.pedrasdelrei.com 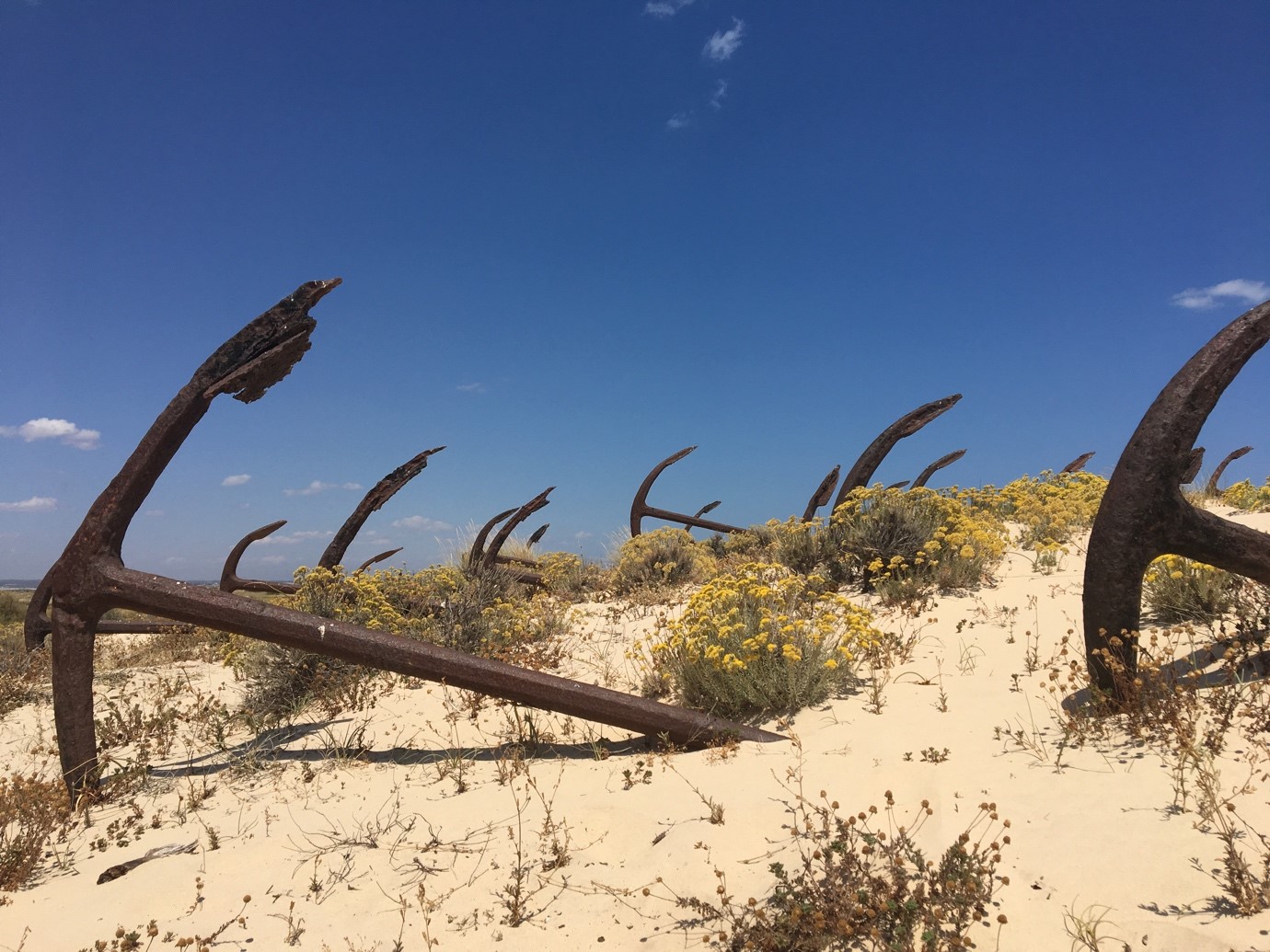 Calm and peaceful, Santa Luzia demonstrates a very Portugese way of life and is the next town along from Barril.  This small fishing village is famous for its octopus – pulpo. It is caught using traditional methods by the fishing fleet and then served up in the family run seafood restaurants which are dotted along the harbour front. The colourful fishing boats return early in the morning delivering octopus, fish and prawns to the fish market or restaurants where the pulpo is cooked using many different methods.

Santa Luzia is situated on the Algarve cycle path (the Escovia do litoral). This charming little village is also positioned on the edge of the Ria Formosa Natural Park, a series of mudflats and lagoons suitable for migratory bird life and during the summer there are many boat and bird watching tours here. 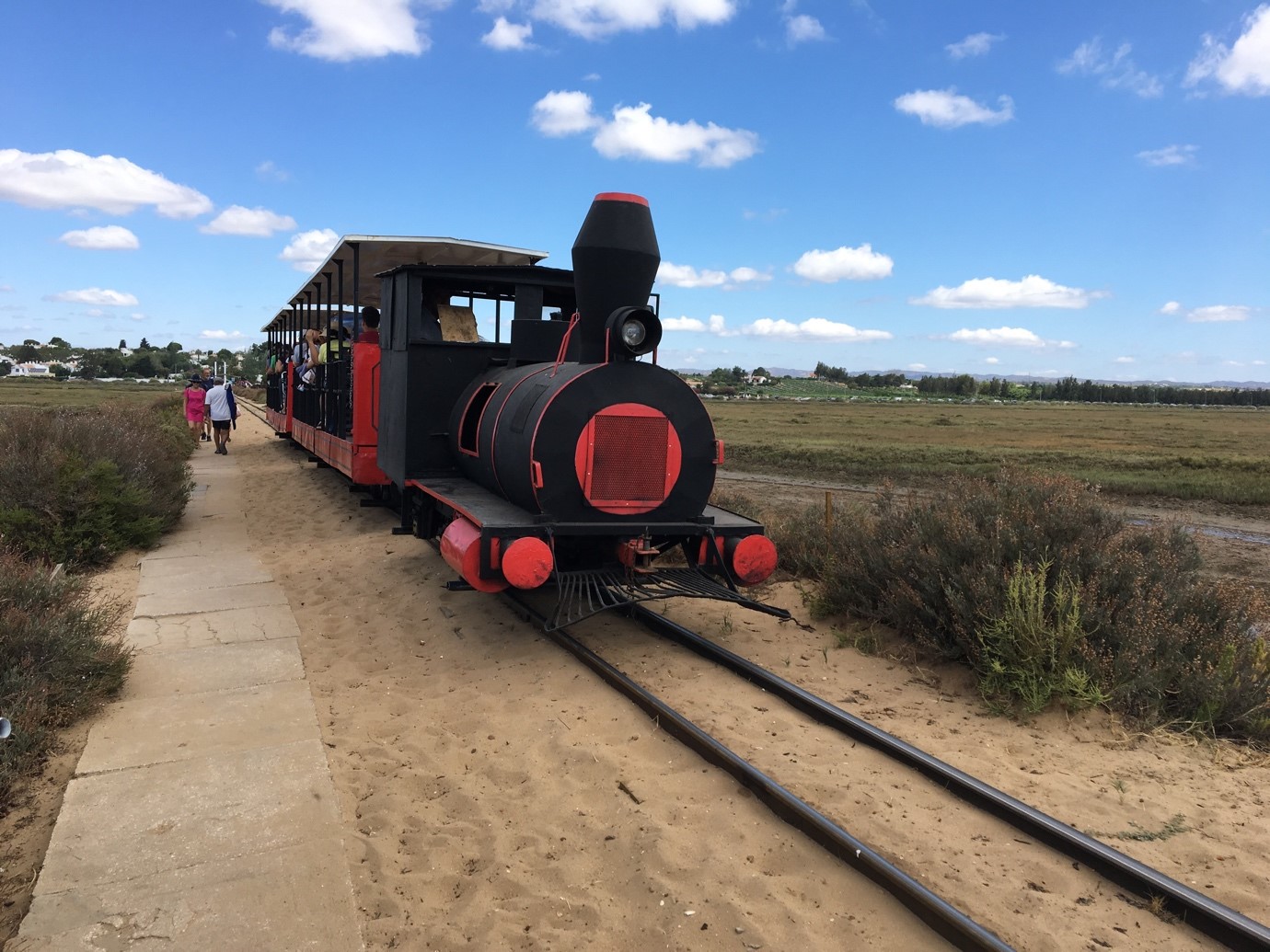 The Festival Med has been another exciting event held at the end of June, beginning of July and runs over a four-day period in Loule which is one of the oldest districts in the Algarve. The town was thought to be founded by the Romans but the settlement was badly damaged in an earthquake in 1755.  Loule’s rich craft heritage owes its origins to the small Muslim community who escaped from the Christians in the 13th century and even today the craftsmen produce many items in leather, pottery, copper and many other materials. The festival starts around 7, and again this is an event for the whole family where you can enjoy the experience of wandering around the old town full of street entertainment, lots of live bands and singers, as well as some large stage acts dotted through the town. This year’s festival even saw a belly dancer in the market place. The locals are very welcoming and open up their front rooms to serve South American style cocktails, jugs of sangria and beers. This is a very busy event, packed with people especially when the good musicians start to play their Latin beat. 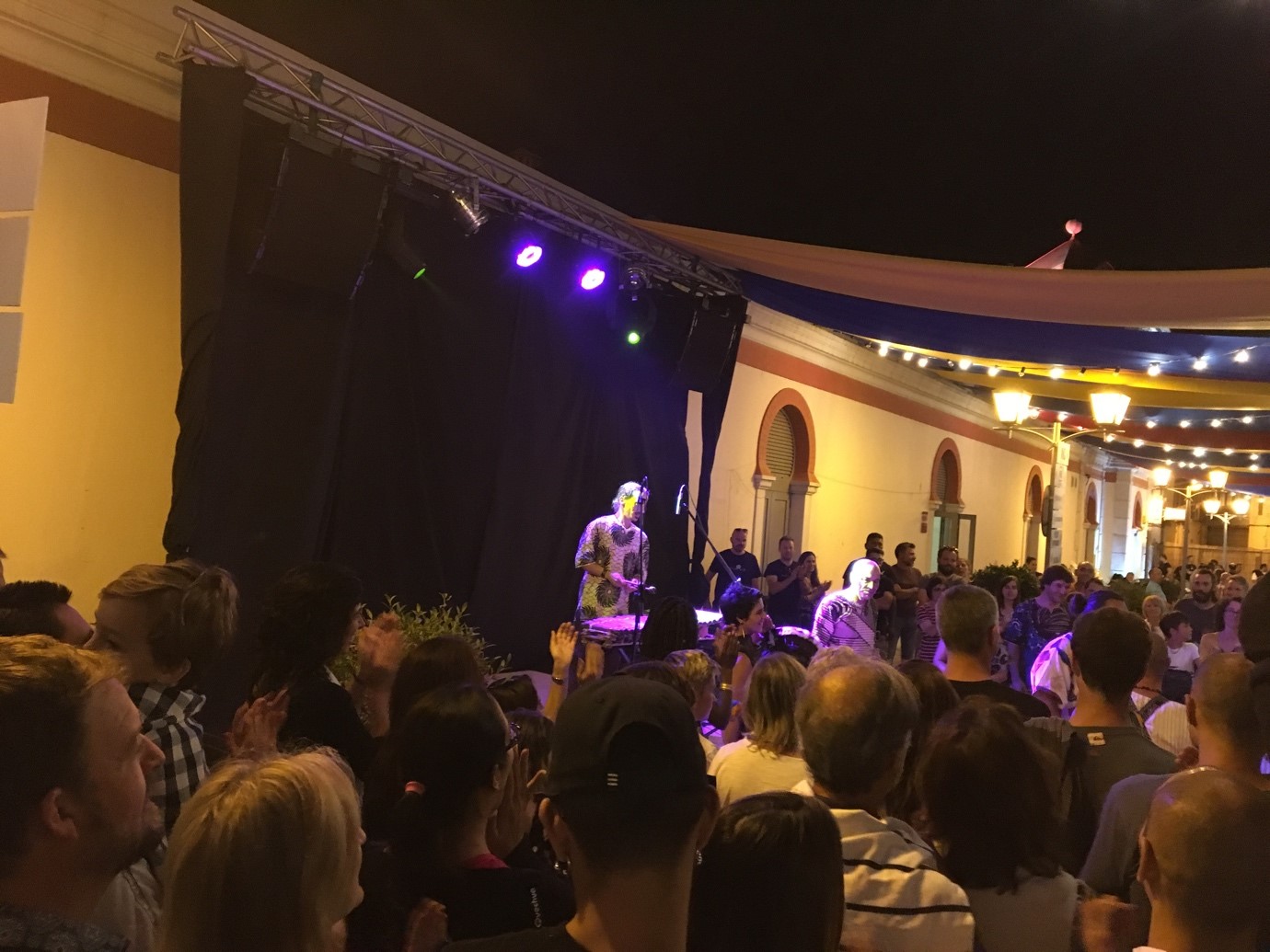 Other exciting events coming up in August are the Sardine festivals. Depending on where you are staying you won’t miss out as Portimao quayside hosts the first event from 2nd to 6th August with a celebration of food and entertainment where you can enjoy cooking demonstrations and live music.

Olhos de Agua Sardine festival runs from the 10th to  13th August down by the beach. With free entry, plenty of entertainment and lots of sardines this is the most popular fish event in Portugal.

Continuing on the foody theme, there’s also Olhao’s seafood festival which runs from the 10th to the 15th August, attracting thousands of people each year. The chefs take challenges to create amazing seafood recipes using all local ingredients and there is live Latin music every evening. Tickets cost €9 for adults and €4 for children 7-12, free for under 6!

Alcoutim is a small town which has the lowest population density in Portugal. Its festival takes place on the riverside from the 8th to the 10th August. Situated on the Portuguese side of the Guadiana river which separates Portugal from Spain, the town has a rich history of wars with its Spanish rival city Sanlucar de Guadiana across the river. However today there is a frequent five-minute ferry service back and forth – no passports needed here! This historic castle town which is an amazing place to discover castles and forts is strategically placed along the border and coast line to protect Portugal from the ancient marauders. Extended panoramic views and vistas can be enjoyed along the route. 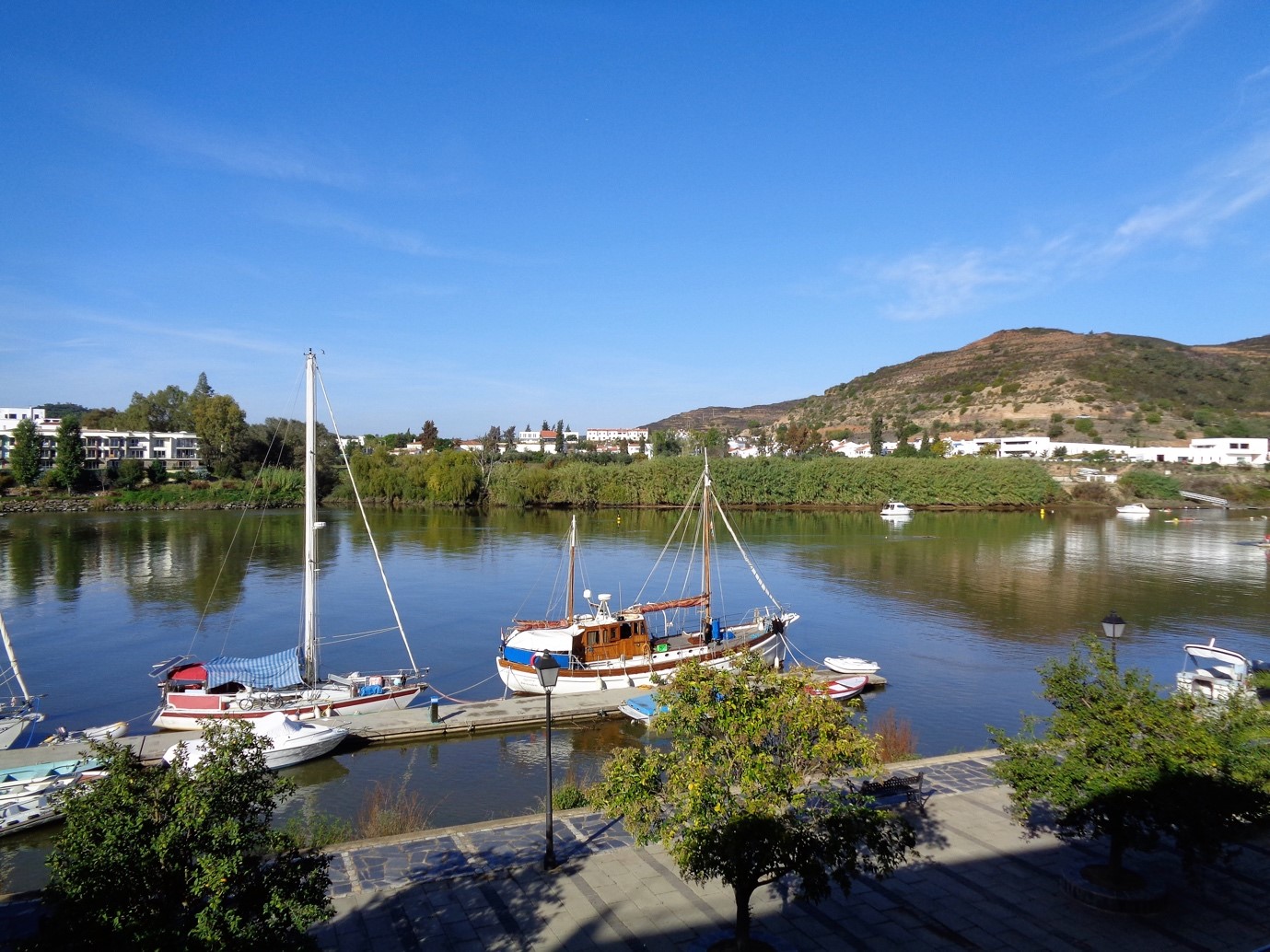 Silves, close to the River Arade was the capital of the Algarve during Moorish times and was known as Xelb, Shalb, Chelb. This ancient walled city with its imposing four arched bridge is home to the Silves Medieval Festival, held evey year from the 11th to 20th August. The city magically reverts back to its medieval past with jugglers, snake charmers, beggars, musicians, jousting tournaments, artisans and merchants selling their wares from street stalls. Step back in time as streets take on typical scenes from everyday medieval life such as the hubbly bubbly pipes in the Arab smoking tents. Plenty of food and drink stalls can also be found along the alleyways of the cobbled streets or calsada. 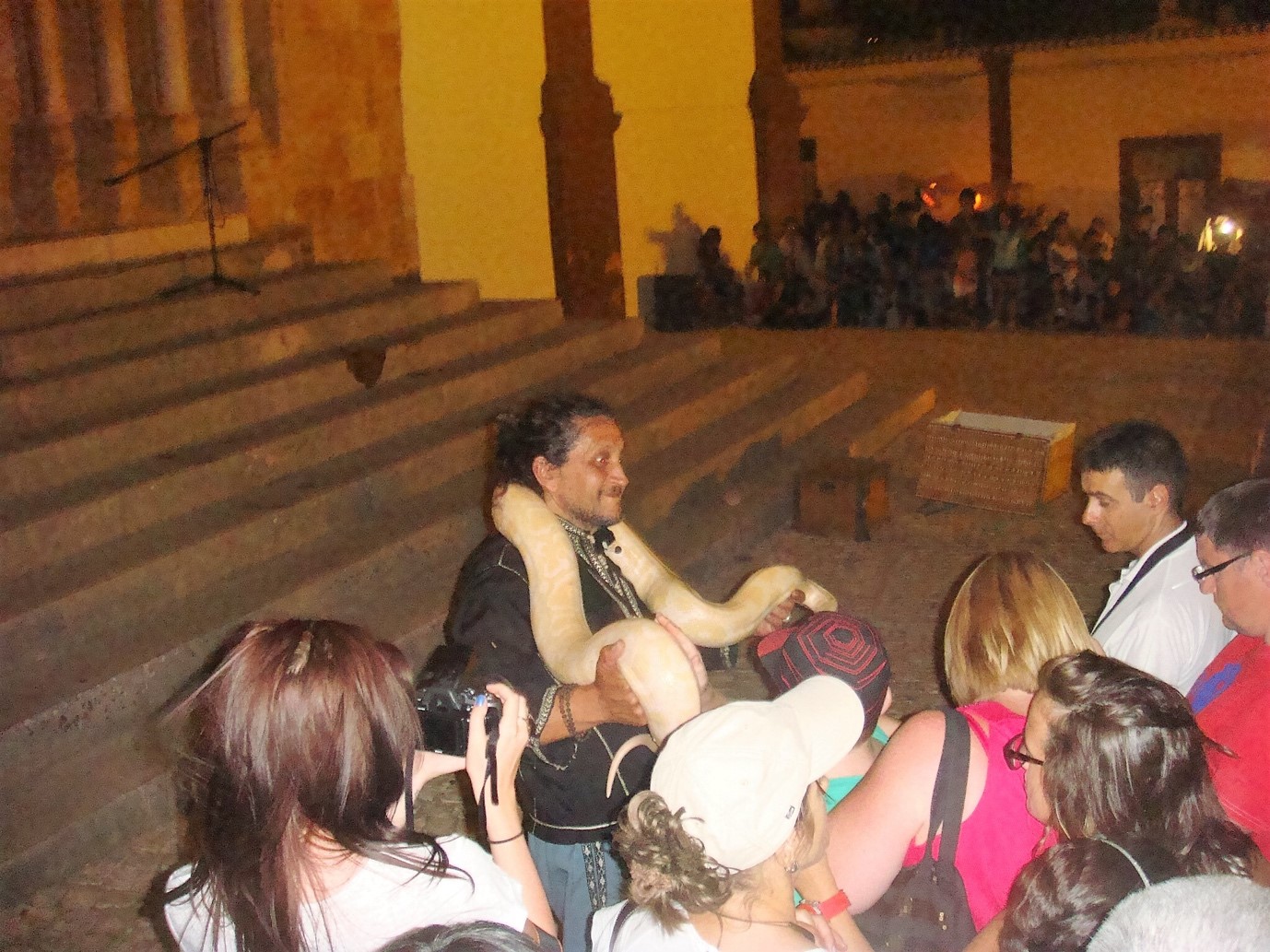 August is a fantastic month on the Algarve and we hope you’ll take the opportunity to enjoy a few of our favourite trips and festivals. Keep in touch with any of your own recommendations and don’t forget to share your experiences with us on The Real Algarve’s Facebook and Instagram pages.